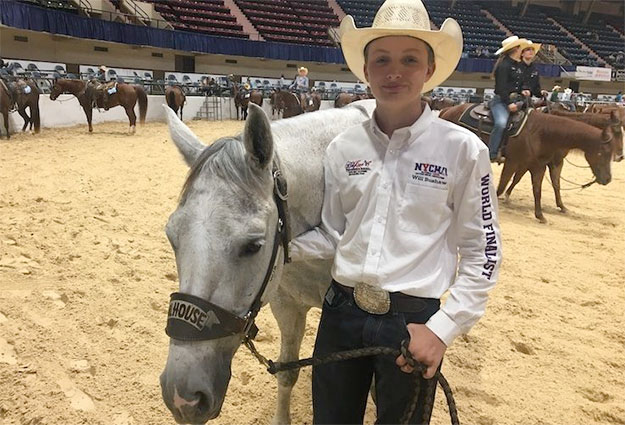 Will Bushaw and Velvets Revolver are quite the team.

No strangers to success at Will Rogers Memorial Center, the Weatherford, Texas, rider and the gelding by WR This Cats Smart continued their winning ways on Wednesday, July 15, by grabbing the Junior Youth World Championship in Fort Worth.

Bushaw, who also won the 2018 Junior Youth Scholarship Cutting with “Milhouse,” entered this year’s show with an insurmountable lead in the year-end points race. They finished with 106 points, which was the most in the class.

Velvets Revolver, who Bushaw said “loves to eat – he eats pretty much every hour of every day,” was a little fresh during the show.

“We got through it,” he said. “I mean, we didn’t have the greatest show, but we did pretty good.”

Bushaw earned his first paycheck aboard a cutting horse in 2015 at a weekend event aboard a horse named QR Reds Reward.

He’s been a regular in the Youth cuttings since then, and also made major limited-age event finals in the Amateur and Unlimited Amateur aboard horses owned by his family’s Crown Ranch LP.

Bred by Mike Hancock, of Spotsylvania, Virginia, Velvets Revolver is a 2012 gelding by Equi-Stat Elite $13 Million Sire WR This Cats Smart and out of Velvets Best Show (by Playgun).

His $282,581 in lifetime earnings makes him the leading earner for both his sire and his dam.