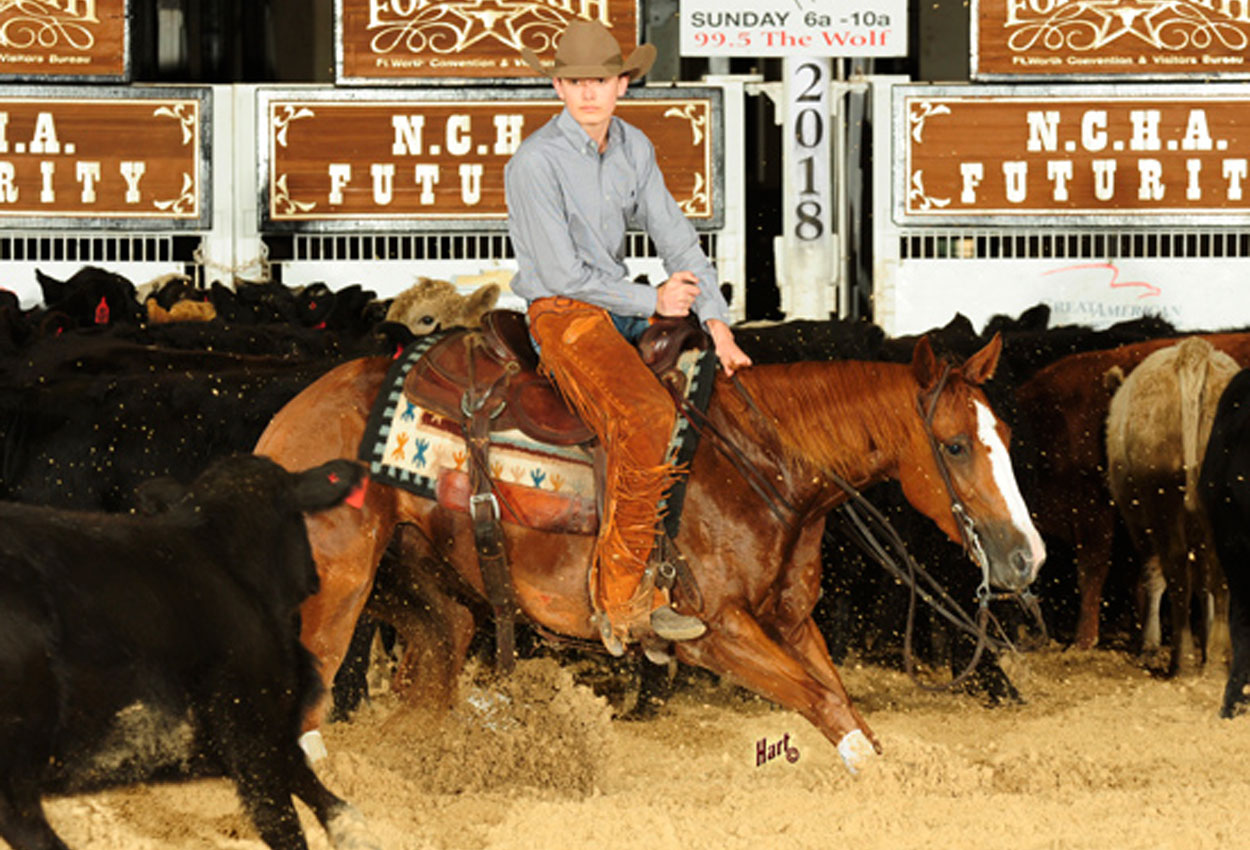 Charles Russell Bushaw Sees It Through to NCHA Futurity Title

In the Limited Non-Pro finals at the National Cutting Horse Association (NCHA) Futurity, 27 competitors rode to the herd in the Will Rogers Coliseum. It was 14-year-old Charles Russell Bushaw who topped them all from the first draw of the second set with a huge 221 aboard the Woody Be Tuff mare Wood You See.

“It was good, I’m real excited. I was just trying to have a good, clean run, and have fun,” Bushaw said after the finals. “I felt pretty good about my cattle. I was a little scared watching them settle because they were a little fast, but I had confidence in Clay Johnson that he would get them settled down real good for me.”

Bushaw, a student at Weatherford Christian, said he knew he had a chance at the title, but he didn’t know how good the chance was.

“Its something I’ve for sure always wanted to do,” Bushaw added.

He gave the audience a thrill when he stayed in the ring with his second cow and duked it out until the buzzer sounded.

“After I worked it for 10-15 seconds, I was really wanting to get off it, but my help were all telling me to stay, so I stayed on it. All or nothing,” said Bushaw, who was the 2018 NCHA Eastern Nationals Non-Pro Champion which contributed $35,000 to his lifetime earnings of $93,469.

While Bushaw admitted he was nervous about losing his cow, he was quick to praise his mount. His confidence in both her and his help allowed him to push through nerves and tough cattle to top the competition with a 4-point lead.

“The horse handled it really well. She didn’t get too scared or nervous; she did great,” he added. “I’d like to thank my help – Casey Green, Clay Johnson, Michael Cooper and my dad – and thank my mom for supporting me in everything.”

Wood You See, a 2015 mare, is out of the High Brow Cat mare The Catattac. She was purchased by Crown Ranch LP as a yearling, but it wasn’t until a few months before futurity season that the mare began to gain the attention of the young competitor.

“I started thinking she was going to be a real nice horse,” Bushaw said of the mare who was trained by his father, Chad. “My favorite thing about her when she cuts is how hard she stops. She is a real easy mare to ride.”

According to Bushaw, the older he gets, the more he loves to cut. “The thrill of doing it and all the people I get to be around, all my friends,” are a few of the many reasons he has dedicated so much time to the sport.